Why Franklin Graham and not Iran? 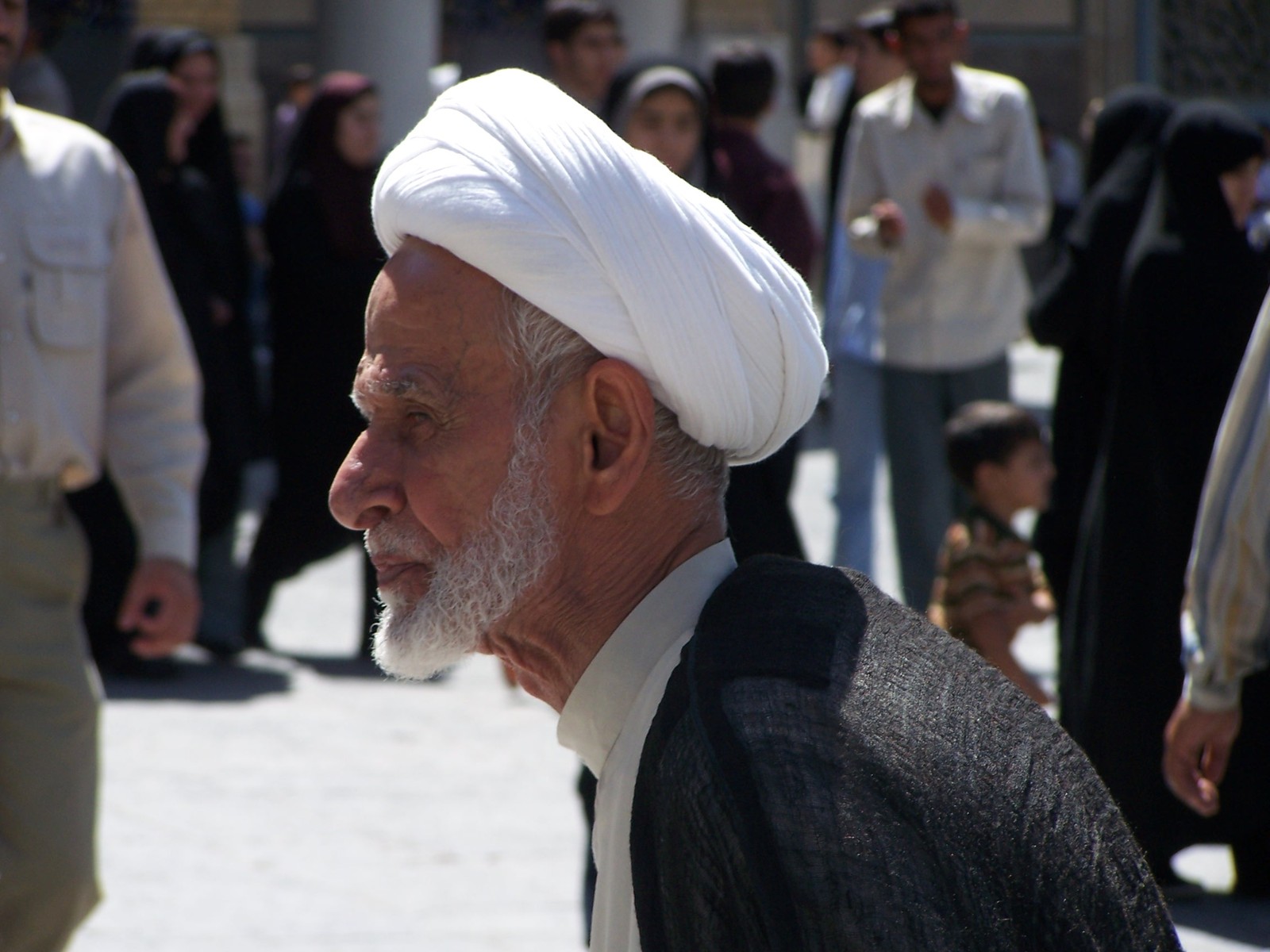 And, oddly enough, I’m going to go the extra mile to be kind if you’re a Muslim. Brown-skinned. Maybe Palestinian. From Iran. Even linked to terrorism. So if you’re a pro-Iranian Palestinian member of Hamas – I’m gonna be extra nice to you.

My guess is – if you’ve been paying attention to what I write and post – you’ve noticed this about me.

I’m not even saying it’s “right.” It’s just what I do. And I have some reasons.

This all came to a head when the two worlds collided last week. Franklin Graham is the perfect stereotype of my first paragraph. And who did he pick on? Muslims. The very type I love to be nice to. So when those two things created the perfect storm, I couldn’t help but jump in!

Most thought what I wrote was helpful and true. Some, well…not so much. The biggest critiques were along the lines of “How could I criticize God’s anointed?” And, why didn’t you “go to him in person first according to Matthew 18?” Of course a post like mine brought out a few of the crazies as well, saying nonsensical things like “Muslims really are out to kill all of us” and that I should “wake up and smell the Islamic coffee.”

Finally, there’s the ever-present criticism of “Why are you always speaking against the ‘good guys’ and ignoring the fact that Iran is making nuclear bombs as we speak and holding Christians hostage and ISIS is beheading Christians daily, and…?! So why don’t you speak out against THAT? The real evil in the world.”

Honestly, that’s a fair question – which I hope to answer here.

First, let me quickly address the first two questions I heard quite a lot – the “God’s anointed” question and the “Matthew 18” question.

I assume the “don’t touch God’s anointed” argument comes from the Old Testament story of David and Saul. One of my favorites actually. David is one of two or three of my most-loved Biblical characters. Maybe #1. (After Jesus, of course!) And I love how he treated Saul. But Franklin Graham is not an authority in my life. The analogy of that story and what I wrote about Franklin Graham’s comments falls apart quickly. And, I was very careful in my words to honor him as a person and a minister. I criticized what he said – not him.

Matthew 18 is addressing issues of someone sinning against you who is in your church. This wasn’t that. Graham made public statements and I gave a public challenge to those statements. There was nothing personal in it and I didn’t even say he was “sinning.” I critiqued his comments.

So on to why I feel so free to criticize him (and “us”) and not the “bad guys.” Four reasons:

1. Let’s start with what I call the “log in eye” principle. For instance, when Franklin Graham said that “we are under attack by Muslims at home and abroad,” (other than that not being true), he was forgetting that Jesus asked us to take the logs out of our own eyes first, and then get the speck (or log) out of the others’ eyes. Notice that Jesus doesn’t say that “they” don’t have something in their eyes – they do. But in order for us to clearly see it, we have to first take the log out of our our own eye.

This is a hugely difficult task. It’s like “loving our enemies.” Not easy. So why did Jesus tell us to take the log out of our eye first?

Could be that if you have a log stuck in your eye, it’s going to hurt. Jesus would like us to be free from such pain.

Could be that having a log stuck in your eye (think of a Cedar of Lebanon type log), is a heavy burden. Jesus told us his burden is light – logs are heavy.

Could be that you become a blind guide – like the Pharisees – if you have a tree stuck in your eye. You’re not very effective as a leader if you can’t see where you’re going.

Could be that Jesus really does want us to help get the speck out of the others’ eye – but we can’t if we have a plank in ours.

I’ve always found that it’s easier for me to see your sin, than mine. I actually think I’m gifted at seeing your sin! And to see the sin of “those Muslims.” Oh my – that’s so easy. Just watch the news. To see the sin of one radical, crazy Muslim guy last week as compared to the lives of four innocent military guys – well, that’s a no-brainer.

But Jesus calls us to the hard stuff. Go the extra mile. Take the log out of our eyes first, and then…..

2. I’ve always found it interesting that Jesus seemed to be hardest on those closest to Him and kindest to those far from Him. Think about this for a minute.

Jesus was really hard on his own religious leaders, not the leaders of the Samaritans or the other polytheistic religions around him. He called out the Pharisees, the Sadducees, the Teachers of the Law. I wonder what “brood of vipers” and “sons of the devil” and “white-washed tombs” would be translated into if spoken today. I don’t want to suggest the four-letter words that might be appropriate – too offensive. But I assume Jesus’s words to his own leaders would have been just as offensive then!

Of the 12 disciples who was Jesus hardest on? Probably Peter. The one who was called “the rock” upon which the church would be built. He was pretty hard on James and John as well.

But he loved Judas. No harsh words to him.

Jesus went the extra mile to love children, lepers, beggars and blind guys. He honored women. And He lifted up the hated Samaritans as the model for his description of what it meant to fulfill the greatest commandment.

So I want to be like Jesus. Encourage the outsiders and be a little rough on my own tribe.

3. Finally, I’d say that I write from this angle because others don’t. Not sure that’s a good reason, to be honest, but it’s true. Of course, others don’t write this way, because they don’t agree with my points #1 and #2. Fair enough. But sometimes we’re just afraid. Or maybe just overly cautious. Maybe we’d make too many people mad and it’s just not worth it. People might leave our church or stop supporting us. Or write mean things about us in public. We don’t like to be misunderstood and called out. Who likes that?

For whatever reason, others don’t – so I do. Oh, I should point out that a ton of folks criticized Franklin Graham over the weekend. And lots of people write things against Christians and Republicans and white people and… But most of them are simply angry or not of this same tribe. So I discount their voices. Anyone can do that.

But I am one of the people from my opening paragraph above. A white, male, Republican, Evangelical leader. This is my tribe. Franklin Graham is me. I haven’t left the faith. I haven’t “gone liberal.” I’m not emergent. I still love the local church. I believe in authority. Just like Franklin Graham.

Therefore, until I change or he does – I will feel free to call him (or anyone from my tribe) on their statements when I feel they do not reflect the heart of Jesus.

And you will continue to do the same with me!

4.  I say what I do because i want to challenge the paradigm of fear that is so prevalent within my tribe.  Fear of the other is rampant. It used to be the Soviets.  Sometimes it’s black people.  Or liberals. Or gays. But for sure, we’re afraid of Muslims.  “Not all Muslims,” we say, “just those radical ones.”  The fundamentalists.  Wahhabis. And of course the Muslim Brotherhood, Hamas, Hezbollah and Al Qaeda.  It goes without saying that we’re afraid of ISIS. And rightly so – right?

Wrong.  No need to fear any of them. For any reason. Ever. How do I know that?  Simple. Jesus tells me so. “Do not fear” is the #1 command in all of scripture.  We have sneaky ways of getting around calling it “fear” though. I’m sure if I asked Franklin Graham if he’s afraid of all Muslims (since he says they are all at war with us) – he would say “no.”  He’d probably agree that God created them and loves them (although I’m sure he’d be quick to add that they need a personal relationship with Jesus or they’re going to hell).

We have clever ways of calling our fear “concern.” Or better yet – “being informed.” The line goes something like this: “Carl we know God loves Muslims (and wants to save them). But….shouldn’t we be wise about this? Aren’t you just a little concerned that Muslims are implementing Shariah law in the U.S.?  And that given Obama’s Muslim heritage and his very pro-Muslim stance (on everything), we should be aware of the times like the Sons of Issachar were?  Let’s not be ignorant like the foolish virgins who didn’t watch what was happening. So, yes, Carl – we should love Muslims (and preach to them), but let’s not be ignorant.”

That’s all code language for fear. You never, ever see Jesus talking like that. Well, except when he confronts his own.

There can be no fear in love.  Therefore, it’s only love that drives fear out.  You get one or the other. Fear or love.  You can’t have both.  So which is it with Muslims?  Even “those” Muslims?  Do you fear them or love them? And since we can only love who we know, do you know – really know – any Muslims? If not…that is your challenge.

P.S. You know when you “know” someone (so you can love them) when:

All my closest friends fit those three things. And many of them are Muslims.  Let this be our challenge. 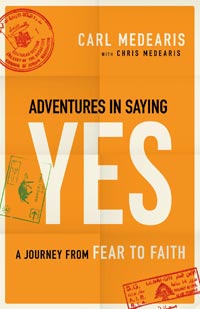 Carl & Chris Medearis’s new book, Adventures in Saying Yes, is the story of a normal family as they seek to follow       Jesus and accept his invitation to live by faith instead of fear. Readers will journey with them through Middle Eastern prisons, death threats, and the freedom that comes in saying”Yes” to Jesus.

“Reading Adventures in Saying Yes is so much fun you don’t realize at first how profound it is. . . . In an era when people, races, religions, and countries are being torn apart by fear, this call to move past fear and follow Jesus into caring connections is essential reading.”–Lynne Hybels, Advocate for Global Engagement, Willow Creek Community Church