Jesus and John the Baptist – by Conrad Gempf 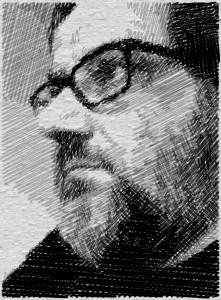 You’re behind the mirror-glass window. There are only two guys in the line-up. They both look kind of foreign and have beards. They’re both wearing those bathrobe-things. The one on the left, holding a card with the number 1, is taller than number 2.
Which one is Jesus?
The uniform next to you squawks into a microphone, “Number one! Look at the mirror and say: ‘Repent, for the kingdom of God is at hand!'”
Number one kinda plants his sandaled feet, and then, even though you know he can’t see you behind the mirror, he still seems to fix his eyes right on you and points to you and says “Repent! For the kingdom of God is at hand!”
“Now you, please, number two.”
Same intense look, same feeling he sees you. “The kingdom of God is at hand,” he says, then points, “So repent!”
Uniform shoves the gum to the side of his mouth with his tongue and asks, “Anything else you want them to say or do — help you decide?”

You turn to him and say …